Tonight's Movie: The Window (1949) at the Noir City Film Festival

Today was a terrific day of programming at the Noir City Film Festival: a triple bill of films based on stories by Cornell Woolrich. With short running times of 73, 81, and 87 minutes, seeing all three films was very doable...and in fact, as I explained in my review of SUDDENLY (1954), film fest viewers were unexpectedly treated to a quadruple bill!

First up was PHANTOM LADY (1944), which I first saw in 2009. I really enjoy Ella Raines, the film's leading lady. The movie has some great set pieces; I especially love Raines stalking a lying bartender. It was interesting that some of Franchot Tone's facial grimaces and reactions played more humorously, seen with a crowd, than when I'd watched it previously at home. The 35mm print had a somewhat dark "smudged" look, but on the whole was acceptable.

The second film on the schedule was BLACK ANGEL (1946), which I first saw about a year ago. It was a treat to see it in an especially gorgeous 35mm print. There are so many things I love about this film, including the performances by Dan Duryea and June Vincent, the music, and the stylish telling of a story with an unexpected resolution. Very highly recommended. 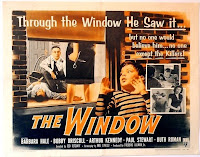 The final film in the Woolrich trio was new to me: THE WINDOW, a real nail-biter of a movie which seemed like a childhood nightmare come to life.

Tommy Woodry (Bobby Driscoll) and his parents (Barbara Hale and Arthur Kennedy) live in a dilapidated tenement building in New York. Tommy is sleeping on the fire escape on a hot summer night when he looks through a window and witnesses his neighbors (Ruth Roman and Paul Stewart) commit a murder. Since Tommy has a reputation for telling tall tales, his exasperated parents don't believe him, nor do the police. But the murderous neighbors learn what Tommy saw, and one night he's left at home alone... 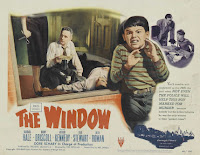 THE WINDOW very effectively mixes a realistic, gritty setting with the stuff of nightmares. (There's a scene where Ruth Roman is peering into the little boy's bedroom window with a flashlight that will unnerve anyone who ever had a childhood bad dream about something scary being outside the window.) The movie was shot on location in New York, and the shabbiness of Tommy's apartment and neighborhood makes his experiences all the more believable; this is no glossy "Hollywood" film, but a very real, rather unpleasant world.

The performances are uniformly excellent, with Bobby Driscoll awarded a special juvenile Oscar for his work. I especially appreciated the performances of Arthur Kennedy and Barbara Hale as Tommy's worn down but loving parents, who are scraping by with the father working the night shift, while also doing their best to manage a somewhat difficult little boy. Paul Stewart and Ruth Roman are appropriately disturbing as the creepy neighbors. 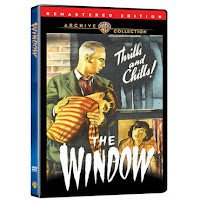 THE WINDOW was directed by Ted Tetzlaff, from a screenplay by Mel Dinelli. The black and white cinematography was by Robert De Grasse and William Steiner.

In his introduction, the Film Noir Foundation's Eddie Muller added the interesting tidbit that while the film is set during the sweltering summer months, the movie was actually filmed in very cold temperatures.

There's a little more information on films based on Cornell Woolrich stories in my review of NO MAN OF HER OWN (1950).

THE WINDOW is available in a remastered DVD-R from the Warner Archive.