Unlike COPPER SKY (1957) and ARROW IN THE DUST (1954), THE WILD DAKOTAS is strictly a low-budget grade B-minus Western. It incorporates extensive stock footage of wagon trains and Indians with new scenes shot on a Southern California movie ranch. The screenplay by Thomas W. Blackburn moves the characters from Point A to Point B with very little insight into their personalities and relationships, wrapping things up in a brisk 73 minutes.

Sue "Lucky" Duneen (Gray) is a former dance hall girl who has joined a Dakota-bound wagon train hoping for a fresh start. The train is guided by Aaron Baring (Jim Davis, later of DALLAS), a black-hatted nasty villain straight out of a melodrama. Aaron has a master plan to drive away all the Indians living near the wagon train's destination, and of course he's going to claim the best land for himself. 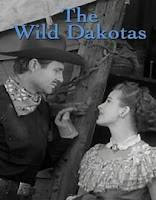 Jim Henry (Williams) is a scout who is friendly with the Indians. Jim intends to broker a peaceful agreement between the pioneers and the Indians, but Aaron will have none of it. Jim and Aaron also clash over Sue; Aaron tries to pressure her into a relationship, feeling she "owes" him because he allowed her into the wagon train despite her past, but Sue admires Jim.

Williams comes off the best among the cast as the honorable scout. In the '50s Williams had matured attractively from the young-looking leading men he played in the '40s, and he's personable. Unfortunately even his character doesn't always come off well; Jim treats Sue with a lack of gallantry, abandoning her in an Indian camp without explanation -- and if he gave one, he'd have to tell her he'd just bet her life that he could produce the bad guy, Aaron, to the Indians. Sue inexplicably forgives Jim instantly when they're reunited. 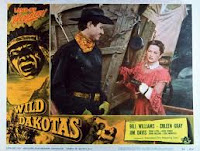 Gray is attractive but has little to do in a fairly underwritten role. The cast also includes reliable character actor John Litel and former child actor Dickie Jones. Lisa Montell, Iron Eyes Cody, and I. Stanford Jolley are also in the film.

The movie was directed by Sigmund Neufeld and his brother Sam Newfield.

This movie has not had a release on DVD or video, but it can be seen on Netflix Watch Instantly.
Email ThisBlogThis!Share to TwitterShare to FacebookShare to Pinterest
Newer Post Older Post Home