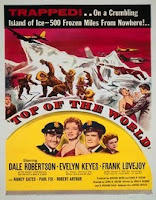 There are so many interesting aspects of the classic film era to explore, and one type of movie I especially enjoy is the '50s Air Force film. I find these bits of Cold War era aviation history fascinating. My latest viewing in this regard was TOP OF THE WORLD, currently available via Netflix Watch Instantly streaming. I give it a thumbs up. 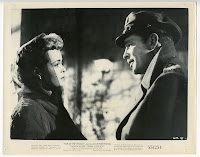 Gannon and a crew of five men are assigned to Operation Deep Freeze, doing weather research at the North Pole. Thanks to an earthquake, the men's plane sinks and the ice they are camped on starts to crack up. The race is on for the Air Force to perform an intricate rescue operation with virtually no space to land a plane.

The romantic relationships don't amount to all that much of a story, but the action and aerial sequences are great. Some of the "snow" scenes are obviously filmed in a soundstage, but exterior shots and stock footage are smoothly mixed in to effectively convey the perils of trying to survive at the North Pole. The rescue sequences were fascinating; first a glider is used to pull most of the men off the ice, and later a plane hooks a line to lift a single man. I also loved shots of a P-32 Twin Mustang. 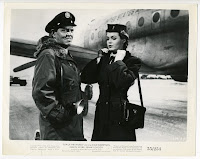 Much of the Alaskan aviation footage was filmed by William Clothier, who later shot many movies with John Wayne; the rest of the black and white cinematography was by Harry J. Wild.

My husband was interested in the opening shots of Oxnard Air Force Base, as he grew up in Oxnard and wasn't familiar with the base. Turns out that in 1970 it became Camarillo Airport.

Robertson and Keyes don't come off all that well in the personal sequences; Robertson sounds like an arrogant Clark Gable wannabe, and Keyes looks curiously haggard, in a somewhat unsympathetic performance. Robertson is more likeable when leading his men in the arctic setting. That said, the actor I enjoyed most was Frank Lovejoy, who is very appealing as a nice guy, an effective commanding officer, and a heck of a pilot. Lovejoy is simply a terrific actor, and I deeply regret his untimely death of a heart attack in 1962, when he was just 50 years old.

Nancy Gates is likeable as the direct, emotionally open Mary. There are fun faces scattered throughout the film, such as Paul Fix playing Robertson's C.O. in the opening sequence. The men on Robertson's team at the North Pole include TV veterans William Schallert (THE PATTY DUKE SHOW) and Peter Hansen (GENERAL HOSPITAL). Robert Arthur, who was also in AIR CADET (1951), is another member of the team.

TOP OF THE WORLD was directed by Lewis R. Foster. It runs 90 minutes.