Tonight's Movie: This Gun for Hire (1942) at the Noir City Film Festival

Tonight's tribute to Alan Ladd at the Noir City Film Festival led off with the rarely seen THE GREAT GATSBY (1949) and continued with THIS GUN FOR HIRE, the film which made Alan Ladd a superstar.

THIS GUN FOR HIRE also launched the highly successful teaming of Alan Ladd and Veronica Lake, who would later costar together in THE GLASS KEY (1942), THE BLUE DAHLIA (1946), and SAIGON (1948), as well as in various Paramount films featuring all-star casts.

Ladd had languished in films for a number of years, playing bit parts and also larger supporting roles in films such as RULERS OF THE SEA (1939) and Disney's THE RELUCTANT DRAGON (1941). (Based on some of his later roles, including THIS GUN FOR HIRE, it's a bit mind-bending watching him as the smiling animator who narrates the Baby Weems cartoon in the latter film.) Ladd's career received a complete reboot with THIS GUN FOR HIRE, in which he received the billing "Introducing Alan Ladd as Raven." 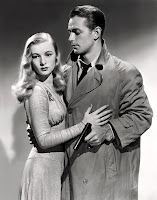 Playing a psychopathic killer may have been an unusual way to launch a highly successful film career -- but it also worked a few years later for Richard Widmark. Ladd's Raven, a hired hit man, demonstrates early in the film that he'll dispassionately kill an innocent bystander without remorse. The only chink in Raven's armor is a fondness for cats.

When Raven is paid by an employer, Willard Gates (Laird Cregar), in marked bills, he sets off in pursuit and crosses paths with Ellen Graham (Veronica Lake), an entertainer who is helping the government investigate Gates. It seems Gates may be a traitor of the worst kind. Ellen's boyfriend Michael (Robert Preston), a police detective, is on the trail of both Raven and Gates, leading to a suspenseful climactic confrontation between all the characters.

Ladd has a magnetism which bursts off the screen. He's completely fascinating, and, like Lake, the audience begins to feel sympathy for his character, until reminded once more that he kills without mercy. He's well matched with Lake, a cool, savvy type who shows she can deal with him from their very first scene together on a train, when she demands he return money lifted from her purse. 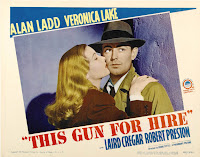 I was rather pleased that I recognized the singing voice of Martha Mears dubbing Veronica Lake on "Now You See It, Now You Don't" and "I've Got You."

The screenplay by Albert Maltz and W.R. Burnett was loosely based on the novel by Graham Greene, A GUN FOR SALE, which was later republished under the film title.

The movie was directed by Frank Tuttle. The cinematography was by John F. Seitz. It runs 81 minutes. 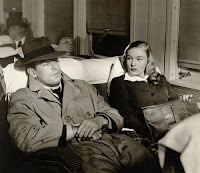 THIS GUN FOR HIRE is available on DVD in the Universal Noir Collection. It can be rented from Netflix or ClassicFlix. It also had a 1995 release on VHS.

This film has also been shown in the past on Turner Classic Movies, which has the trailer available on the TCM website.

THIS GUN FOR HIRE is top-drawer film noir which belongs on the "must see" list of anyone who loves the genre.
Email ThisBlogThis!Share to TwitterShare to FacebookShare to Pinterest
Newer Post Older Post Home