Two years after starring in the classic film noir ANGEL FACE (1952), Robert Mitchum and Jean Simmons reunited for a much different film, a small-town romantic comedy titled SHE COULDN'T SAY NO.

Simmons plays Korby Lane, a wealthy young woman educated in England (hence her accent) who returns to a little town in Arkansas for the first time since she was young. She wants to anonymously repay the town's citizens for donating for an operation which saved her life when she was a toddler and her family had no money.

The town is a sort of early version of Mayberry, a slow-paced place filled with "characters." Doc (Mitchum) spends much of his time fishing, and if he's needed for an emergency there's an alarm button on his house which sets off a racket loud enough to pull him out of the river. Doc's constant companion is a cute little boy named Digger (Jimmy Hunt). 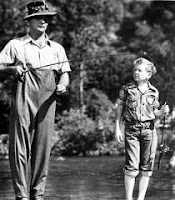 It's the kind of town where the general store owner (Edgar Buchanan) leaves the store unlocked overnight in case anyone needs anything, and Doc brings half a dozen eggs to leave in the store as payment when he has a late-night yen for a milkshake.

There's the local vet (Wallace Ford), the mailman (Pinky Tomlin of TIMES SQUARE LADY), the town tippler (Arthur Hunnicutt), the hypochondriac who perennially sits by his roadside mailbox (Gus Schilling), the judge (Raymond Walburn), the farmer (Dabbs Greer) who pays Doc with a couple of pigs for delivering his baby, and the pretty young woman (Eleanor Todd) who tries to get Doc's attention with a daily delivery of a jar of homemade cole slaw.

When Korby's anonymous gifts start raining into this little country paradise, the results aren't quite what she expects... 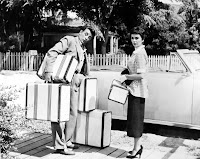 This is, plain and simple, a good-natured, cute little movie. I liked the people, I liked the town, and I liked the movie. It may not be a four-star classic, but it made me smile while I watched it, and that counts for a lot.

I especially enjoyed Mitchum in a laid-back, attractive role. Simmons is cute in the title role as the girl with a good heart who doesn't foresee how her kind largesse will impact the town. (As a side note, Simmons is saddled with the kind of ultra-short '50s haircut I've complained about before; I'll never understand why women in the '50s thought it was chic to cut off most of their hair.) My only wish for the film would have been a little more development of Doc and Korby's relationship.

The screenplay had multiple contributors, including William Bowers, who did excellent work on films such as CRY DANGER (1951). The movie was directed by Lloyd Bacon. The film runs 89 minutes.

Leonard Maltin's CLASSIC FILM GUIDE gave this film a scathing 1-1/2 star review, particularly denigrating Mitchum's performance. I'm glad I tried it anyway, because I think the reviewer on Mr. Maltin's staff must have gotten out of bed on the wrong side the morning he or she watched the movie. The three star review in Steven Scheuer's rating guide was much closer to the correct assessment, in my opinion.

SHE COULDN'T SAY NO has been released in Europe on Region 2 DVD, but it has not had a DVD or VHS release in the United States.

I recorded SHE COULDN'T SAY NO from a previous airing on Turner Classic Movies. By coincidence, the movie will air again tomorrow on Tuesday, April 17th.