NAKED ALIBI is a great example of why I love the Noir City Film Festival -- the opportunity to enjoy little-known films in gorgeous 35-millimeter prints. NAKED ALIBI was a fun, actioned-packed noir treat from start to finish.

The second night of the Noir City Festival celebrated actor Sterling Hayden and two of the films he made in 1954, with SUDDENLY following NAKED ALIBI. Judging by the size of the crowd, Hayden is popular with noir fans; as an actor, Hayden might not have always demonstrated the greatest range, but he has tremendous screen presence, a big man with attitude to spare. I've grown to like him a lot. 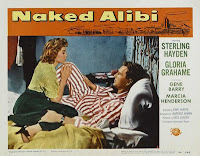 Hayden played a cop in both of the evening's films. While he plays a genial small-town sheriff in SUDDENLY, his police chief in NAKED ALIBI, Joe Conroy, has more of an edge. Joe is convinced that Al Willis (Gene Barry), a seemingly average guy who owns a small bakery, has killed three cops. Thanks to political pressure and sensational press coverage, Joe ends up losing his job as police chief, but he's not giving up on his attempt to prove that Al is a murderer. 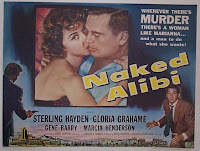 Al, seemingly on the verge of cracking up under the pressure of constantly being tailed by Joe, tells his wife (Marcia Henderson) he needs to get away and clear his head, and he takes off for Border City, Mexico. The viewer isn't clear for quite a while whether it's Joe or Al who's got serious problems. Throw in Marianna (Gloria Grahame), a chanteuse in a Border City cantina who seems to know the married Al extremely well, and you've got the makings of an interesting movie.

Hayden and Barry are both good as adversaries fighting an increasingly violent battle. Hayden's very enjoyable to watch, whether he's bemused by Marianna's mixed messages or grimly determined as he tails Al. Barry's Al is a character which isn't completely explained, but what's there on screen is sure fun. 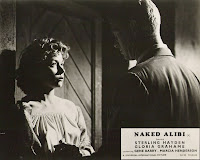 Gloria Grahame is someone I can generally take or leave -- I know, noir fans, that's heresy! -- I like her in some films and find her annoying in others. I liked her a lot in NAKED ALIBI, where she gives a low-key, appealing performance, including putting over the song "Ace in the Hole," dubbed by Jo Ann Greer. Marianna has some interesting shades, finding Al's dangerous edge exciting but losing interest when he goes too far and there's a nicer hunk of man (Hayden) in town. Grahame is sympathetic and interesting; it's ironic that this film came out the same year as HUMAN DESIRE, where I found her performance quite tiresome. 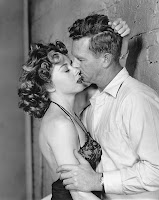 Chuck Connors got a nice round of applause when he first appeared onscreen as a cop working for Hayden. The cast also includes Casey Adams (aka Max Showalter), Billy Chapin, Don Haggerty, and Tol Avery.

The director of this 86-minute film was Jerry Hopper. The attractive black and white cinematography was by Russell Metty, with location shooting in Tijuana, standing in for "Border City," foreshadowing Metty's later work filming TOUCH OF EVIL (1957).

Here's video of the Film Noir Foundation's Eddie Muller introducing this movie in Seattle earlier this year; his talk focuses on Gloria Grahame and Sterling Hayden, and it also includes a discussion about some of the problems related to the "digital revolution." (More on that issue coming in my review of SUDDENLY.)  Eddie's enthusiasm is contagious, and this video helps to illustrate why it's such fun to attend the films he hosts. 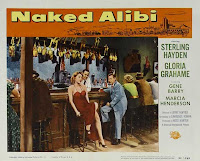 This Universal film is not available on VHS or DVD. Universal recently struck a beautiful brand-new print at the request of the Film Noir Foundation.

Anyone who has the chance to see this great-looking, entertaining movie at a future film festival should definitely take advantage of the opportunity.
Email ThisBlogThis!Share to TwitterShare to FacebookShare to Pinterest
Newer Post Older Post Home