Having watched EARTH VS. THE FLYING SAUCERS (1956) a couple Sundays ago, today it was time to step out of my movie comfort zone again and watch another '50s sci-fi film. Today's movie was the seriously creepy IT CAME FROM OUTER SPACE, starring one of my favorite actors, '50s sci-fi hero Richard Carlson.

IT CAME FROM OUTER SPACE is based on a story by Ray Bradbury. One night John Putnam (Carlson) and his fiancee Ellen (Barbara Rush) see a giant meteor crash to earth. But when John investigates, he discovers the meteor is actually a spaceship. Since the ship is almost immediately buried by a landslide, no one but Ellen believes John, and indeed, the townspeople make fun of him, especially the sheriff (Charles Drake).

Then strange things begin to happen, as townspeople disappear one by one, replaced by robotic-acting lookalikes. What's going on, and what do the aliens want?

The story is presented in a quietly compelling manner. Carlson's low-key demeanor makes him very believable, as least as far as the audience is concerned, and at the same time it's understandable that the townspeople disregard his fantastic story. The aliens adopting the bodies of the local citizens as their "clothes" is quite well done; the audience is still able to discern the aliens from the real people, strictly based on behavior. 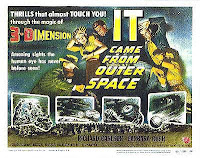 The film prompted the age-old movie question: when something spooky happens, why do people get out of their cars and investigate instead of getting the heck out of Dodge? Of course, if they left, then there wouldn't be a scary movie! The tension in this film gradually ratchets up in a very effective manner.

This was one of several science fiction films Richard Carlson made in the '50s; his credits also included THE MAGNETIC MONSTER (1953), CREATURE FROM THE BLACK LAGOON (1954), and RIDERS TO THE STARS (1954). There's additional information about Carlson's career and sci-fi connections in my review of RIDERS TO THE STARS. 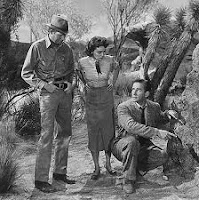 Russell Johnson plays one of Carlson's friends. Years before he played the Professor on GILLIGAN'S ISLAND, Johnson was quite a handsome young man. I particularly enjoyed him as the hotheaded Jimmy in the Western LAW AND ORDER (1953), released the same year as IT CAME FROM OUTER SPACE.

This movie was directed by Jack Arnold, who also directed Carlson in CREATURE FROM THE BLACK LAGOON. The screenplay was by Harry Essex, with cinematography by Clifford Stine. The movie runs 81 minutes. 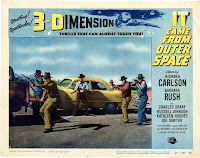 IT CAME FROM OUTER SPACE was released on a nice DVD with extras including a commentary track and a documentary. The DVD can be rented from Netflix or ClassicFlix.

It was also released on VHS.

Amazon Prime members can watch this film at no charge on Amazon Instant Video.

IT CAME FROM OUTER SPACE is a well-done film which is recommended for fans of Richard Carlson and/or '50s sci-fi.
Email ThisBlogThis!Share to TwitterShare to FacebookShare to Pinterest
Newer Post Older Post Home