ISLAND IN THE SKY is an excellent aviation film directed by William Wellman, featuring an incredible cast. This movie would be worth seeing simply to catch the parade of great movie faces, but it's also a heck of a good story.

Sometime after WWII, a Corsair piloted by Captain Dooley (John Wayne) goes down in bad weather in the frozen, uncharted wilderness of Labrador. Dooley and his crew (Jimmy Lydon, Sean McClory, Hal Baylor, and Wally Cassell) survive the landing, but staying alive in the sub-zero environment won't be easy, especially with minimal food and limited radio power to contact rescuers. 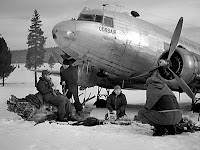 Dooley's fellow private pilots band together with the military to launch a search, which will be the equivalent of trying to find a needle in a haystack. The actors playing the pilots include Lloyd Nolan, Andy Devine, James Arness, Paul Fix, Allyn Joslyn, and Louis Jean Heydt. 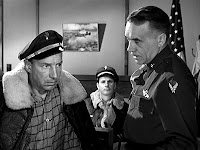 It's an amazing collection of actors, and yet despite the huge cast, they have their moments to create distinctive personalities and characters. There are some excellent group scenes, such as the pilots making the difficult choice whether to return to their initial search area or look elsewhere, knowing that making the wrong decision will likely mean death for their stranded friends -- especially as bad weather is expected to blanket the area in 36 more hours. Watching that scene, I couldn't help thinking how amazing it would have been to be present when so many talented actors were all in the same room; as it is, we're fortunate it was preserved on film.

Among the many great faces in this film, my favorite performance was by Andy Devine as the low-key pilot, Willie Moon. The portly Moon is charming, whether talking to his wife (Ann Doran) on the phone or swimming at the Y with his boys (played by director Wellman's sons); Moon is simultaneously calm and completely in command, leaning back casually in his seat as he pilots his plane, but not missing a thing. When Moon's radio man (Bob Steele) asks the unflappable Moon "You getting excited?" it's quite a little moment. It's a wonderful part, perfectly put over by Devine.

The scenes with Wayne's crew, filmed around Donner Lake in Truckee, are almost painful to watch at times; the temperature in the room seemed to drop the longer I watched the movie! Wayne is outstanding in a subdued role as the quietly heroic captain who works hard to stay calm and think logically, giving his crew encouragement and helping them to stay alive.

The story is based on a true incident, and there were some interesting survival details one might not expect, such as that it was colder to sleep inside the plane, with its metal walls, than in a lean-to the men built in the snow. There are also many interesting details about the challenges of flying and navigating in that era, such as the navigators taking shots of the sun and checking their watches to help figure out their course.

The screenplay for this 109-minute film was by Ernest K. Gann, based on his book. The following year Gann, Wayne, and Wellman teamed again for the better-known aviation film THE HIGH AND THE MIGHTY (1955). Director Wellman, incidentally, also served as the narrator of ISLAND IN THE SKY.

The black and white cinematography was by Archie Stout, with aerial cinematography by William Clothier. Clothier also provided the aerial photography for the recently reviewed film TOP OF THE WORLD (1955), which has a similar arctic survival theme. Clothier had a decades-long working relationship with Wayne, which ended with Clothier's retirement after shooting THE TRAIN ROBBERS (1973). 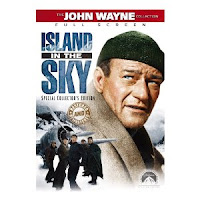 ISLAND IN THE SKY is available in a Collector's Edition DVD released by the John Wayne Estate. The extensive extras include a commentary track with contributors including Leonard Maltin, William Wellman Jr., Jimmy Lydon, and Darryl Hickman; an introduction by Maltin; the trailer; photos; and multiple featurettes. The DVD can be rented from Netflix or ClassicFlix.

The film can also be purchased for downloading from Amazon Instant Video.

ISLAND IN THE SKY will air on Turner Classic Movies on July 30, 2012; the TCM page has a "remind me" feature. TCM also has the trailer.