The second time was the charm for me at this weekend's TCM Classic Film Festival: Although Thursday night's screening of CRISS CROSS (1949) sold out, there were plenty of standby seats available this evening at the Egyptian Theatre for an extra-special showing of the iconic film noir GUN CRAZY.

This was my first time to see GUN CRAZY, and it couldn't have been under better circumstances, with a 35mm print introduced by the Film Noir Foundation's Eddie Muller. Best of all, British actress Peggy Cummins made her first visit to the United States in over six decades in order to discuss the film with Muller prior to the screening.

Cummins, who is 86, was the picture of elegance and charm as she shared stories of her brief Hollywood career. She was originally brought to the U.S. to star in FOREVER AMBER (1947), but it was decided she wasn't "sexy enough" and the role was recast with Linda Darnell. She particularly mentioned having a good experience making MOSS ROSE (1947) with Victor Mature, Vincent Price, and Ethel Barrymore. She also mentioned a brief run-in with Howard Hughes.

Cummins also had good things to say about GUN CRAZY. She wasn't sure what the producers saw in her when they cast her as wild, feral (Eddie Muller's adjective) gunslinger Annie Laurie Starr. She spoke favorably of John Dall and said that working with good actors raises your own performance, and said that everyone who brings their talents to a film helps the actors put over a successful performance on screen. 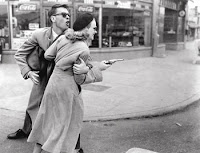 Cummins spent considerable time discussing the famous bank robbery sequence, filmed in a single take; she said her wild driving made the crew in the back of the car nervous! With cinematographer Russell Harlan capturing it all on film, Cummins and Dall ad-libbed their dialogue as they drove through the town and looked for a parking place, then she chats up a cop on the sidewalk, Dall returns to the car after the robbery and they speed away. It's a remarkable set piece, lasting four or five minutes, and it's well worth seeing the film for that sequence alone.

Eddie Muller mentioned the fact that the film was written by the blacklisted Dalton Trumbo. Trumbo was later asked if he felt exploited by the film's producers, who could hire him at a lower price under the circumstances, but Trumbo said to the contrary, they were the only ones who would hire him and he was grateful to have an income for his family.

GUN CRAZY tells the story of Bart Tare (Dall), who has been obsessed with guns since he was a child (played by Russ Tamblyn, then billed as "Rusty"). A veteran of both reform school and the military, Bart meets his perfect -- but destructive -- match in Annie Laurie Starr (Cummins), a carnival sharpshooter with a dark past.

Bart and Laurie soon marry, but when funds run low Laurie makes it clear she wants the nicer things in life, and she wants them quickly. She wheedles Bart into committing an armed robbery, and they're literally off and running, robbing their way across the country, in an endless downward spiral of holdups, car thefts, train hopping, and ultimately killing. 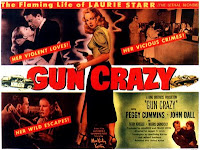 Did I like the film? Yes and no. It's a downer story, and I've never been much of a fan of films exclusively about criminals; for example, I similarly don't care much for Westerns which focus on outlaws. It's inevitable that the characters and the story will come to a bad, sad end.

On the other hand, the execution of this film is brilliant in every regard, including the performances, costumes, black and white photography, and location choices. In addition to the bank robbery sequence, I especially liked the staging of the robbery at the meat packing company, Bart and Laurie's visit to the Ocean Park Pier, and the final foggy sequence in the marsh. While GUN CRAZY isn't my favorite kind of film, I nonetheless enjoyed and admired it.

The director of this 87-minute film was Joseph H. Lewis, a stylish director whose films also included MY NAME IS JULIA ROSS (1945) and THE BIG COMBO (1955). I was fortunate to see THE BIG COMBO on a big screen in February at the Million Dollar Theater in Downtown Los Angeles.

Fans of GUN CRAZY should be sure to read Robby's post on the movie locations at Dear Old Hollywood. One sequence, where Dall buys a newspaper, was filmed on Las Palmas Avenue in Hollywood, which is a street bordering the block where the Egyptian Theatre is located! The newsstand, a longtime favorite of my father's, is still there over six decades later, as is the Baptist church glimpsed at the end of the block. 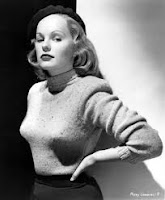 Six decades later, they also still stop you at the California state line and ask if you're bringing fruit into the state. I got a particular kick out of Ray Teal as the cranky border inspector. 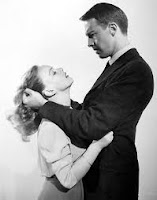 GUN CRAZY is available on DVD in the Film Noir Classic Collection, Vol. I. Extras include a commentary track by Glenn Erickson of DVD Savant. The DVD can be rented from Netflix or ClassicFlix.

All in all, it was a great evening, and the icing on the cake was the chance to meet Jill of Sittin' on a Backyard Fence and The Cinementals, Will of The Cinementals, Jandy of The Frame and Row Three, and Trevor of A Modern Musketeer. I'm really delighted that I had the chance to experience a bit of the TCM Festival this year...and starting next weekend, I'll be regularly reporting on the Noir City Festival which takes place at the Egyptian Theatre from April 20th to May 6th, 2012.
Email ThisBlogThis!Share to TwitterShare to FacebookShare to Pinterest
Newer Post Older Post Home