The first film on the evening's schedule was a brand-new 35mm print of the rarely seen 1949 film version of THE GREAT GATSBY. As Eddie Muller and Alan Rode of the Film Noir Foundation said in their introduction, one might not initially think of GATSBY as noir, but a film that's got Elisha Cook Jr. playing piano in a somewhat spooky house is close enough to qualify as noir...and besides, who wouldn't want to watch this hard-to-see film in a beautiful new print?

Ladd's daughter, Alana Ladd Jackson, was in the sold-out audience to watch THE GREAT GATSBY alongside the film that made her father a star, THIS GUN FOR HIRE (1942). (THIS GUN FOR HIRE was reviewed here.) Macdonald Carey's son, Steve, was also present, along with Paul Maibaum, the son of GATSBY screenwriter-producer Richard Maibaum. 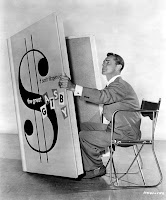 Jay Gatsby was a role Alan Ladd fought to play, even threatening Paramount that he would go on suspension if the studio didn't allow him to make the film. The studio execs finally assented, and he is perfectly cast in the role. Ladd gives a nuanced performance that captures all aspects of the self-made man who is newly powerful yet also achingly vulnerable. He was, in a word, superb.

I also liked Macdonald Carey very much as Nick, who observes the unfolding story with a raised eyebrow; I've been a Carey fan for some time now, and other than Ladd, his was my favorite performance in the film. Ruth Hussey is entertaining as Jordan and provided the film with a needed light touch, but she didn't have enough to do and her character was a bit of a riddle. Barry Sullivan is also something as an enigma as Tom; Sullivan conveys a certain power, but the motivation for his unfaithfulness is never really explained, nor is his determination to hang on to Daisy.

It's been more years than I can count since I last read the novel, but I was completely mystified by Betty Field's portrayal of Daisy. Field's Daisy speaks in a lower-class squawk, she's not particularly attractive, and the character in general comes across as a helpless dimwit. Perhaps the audience was supposed to realize that Gatsby's idealization of Daisy isn't real, but I think it's more likely that Field was simply miscast as the object of Gatsby's dreams who ultimately leads to his doom. 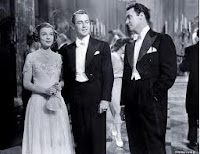 Additionally, the black and white cinematography by John F. Seitz was rather curious. The male actors all look terrific, but Field and Hussey were harshly lit and not filmed looking their best. The photography may have subtracted from Field's portrayal, in particular.

The cast also includes Shelley Winters in one of her tiresome screechy floozy roles, with Howard Da Silva as her beaten-down husband.

THE GREAT GATSBY was directed by Elliott Nugent. It runs 91 minutes.

Whatever the film's flaws, it's fascinating viewing and a particular "must" for Alan Ladd fans. Alas, this Paramount film has never had a release on DVD or VHS; however, as I write this post, it's available on YouTube. I highly recommend taking a look at this rarity while it's available, as rights issues may prevent a DVD release for years, if ever.