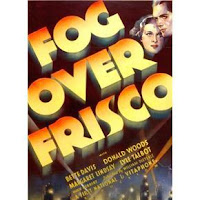 Two or three years ago I attempted to record FOG OVER FRISCO from Turner Classic Movies, but somehow it failed to record in its entirety. The movie looked interesting, so I've been watching for it to play again, but I've never noticed it on the schedule. When the last Warner Archive sale came around, I decided to buy the movie, and I'm glad I did, as it proved to be quite an enjoyable film.

Arlene Bradford (Bette Davis) is a bad society girl who has ostensibly reformed from her wild ways with her engagement to Spencer Carlton (Lyle Talbot). However, within minutes the film reveals that Arlene has a couple big secrets up her sleeve, which won't be revealed here. 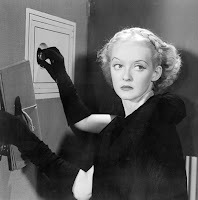 Arlene is the despair of her father (Arthur Byron), but her kind stepsister Valkyr (Margaret Lindsay) tries to help her. One night Arlene disappears, and Val and her beau Tony (Donald Woods), a newspaper reporter, launch a search.

FOG OVER FRISCO tells an intricate tale populated with a large cast in a lightning-fast 68 minutes. I especially enjoyed the depiction of the police investigation in the last ten minutes of the movie, which zooms along with admirable efficiency. Released in the final month of the pre-Code era, the movie has a couple mildly racy moments, but on the whole it plays more like a film released after the Code began to be enforced. 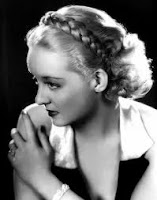 Davis is memorable as a wild child who gets her thrills in all the wrong ways. It's only a shame she didn't have more screen time, as she's quite fascinating in a colorful role which seems tailor-made for Davis. Davis was nominated for her first Best Actress Oscar, for OF HUMAN BONDAGE (1934), the same year she made FOG OVER FRISCO.

Lindsay is pretty and pleasant as the good sister (stuck with a rather odd name!), while Woods is bland but adequate as the leading man. Talbot makes an impression in his scenes, effectively conveying his character's despair as his life unravels bit by bit.

There are a number of interesting portrayals among the supporting cast, including actor-director Irving Pichel as one of the villains, Alan Hale as the San Francisco Chief of Police, and be sure to keep your eye on the mysterious butler, played by Robert Barrat. Hugh Herbert plays a klutzy newspaper photographer, in the least annoying and mannered performance I've ever seen by him. 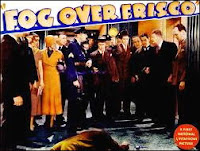 Henry O'Neill and Douglas Dumbrille are also in the cast, and George Chandler pops in as a taxi driver -- one of over 445 screen appearances in Chandler's long career. Dennis O'Keefe is credited as a reporter, but I didn't spot him.

Gordon Westcott, the father of actress Helen Westcott, plays the brother of Irving Pichel's character. Sadly, Westcott died the following year due to injuries in a polo game where the other players included Walt Disney.

The movie was directed by William Dieterle and shot by Tony Gaudio. Some nice location shooting in San Francisco lends atmosphere, although it's obvious that only Margaret Lindsay's double made it to Northern California.

Robert N. Lee's screenplay was adapted by Lee and Eugene Solow from a book by George Dyer. Dan Stumpf of The Mystery File compares the film version with the book.