The recent passing of actress Joan Taylor provided the impetus for me to watch EARTH VS. THE FLYING SAUCERS for the very first time today. I enjoyed this film, which showcases the work of special effects genius Ray Harryhausen, although some folks may be amused that I also admit to finding it pretty scary!

Sci-fi fans doubtless already know the story well. Dr. Russell Marvin (Hugh Marlowe) and lovely young Carol (Taylor) have taken a quick break from their scientific work to get married. On the way back to the remote outpost where Dr. Marvin has been launching satellites, the Marvins' car is "buzzed" by a flying saucer. They're remarkably calm about the experience, but shortly after they return to work, the flying saucers return to destroy the entire station. 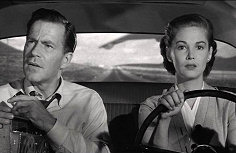 The Marvins are the sole survivors of the flying saucer attack, and it's up to Dr. Marvin to figure out a way to protect the earth before the saucers attack again!

The story is told in an effective manner, with the Marvins' brave scientific approach to a very big problem helping to make it more believable. The Marvins seem a bit of a curious match, as the somewhat cranky Dr. Marvin is noticeably older than his beautiful bride, but they admirably hang tough together in the most dire of circumstances. I also liked Donald Curtis as the military aide assigned by the Pentagon to keep tabs on Dr. Marvin.

It's a curious thing, but even being fully aware that it's "just a movie" filled with miniatures, back projections, stop motion, and wires, this particular type of old movie has an impact on me like nothing else. My own children aren't affected by this type of film in the least, but in my case spooky aliens and spaceships seem to evoke some sort of primal response which I suspect is rooted in childhood.

As I wrote when I saw WAR OF THE WORLDS (1953), seeing just a tiny bit of a movie like this as a young child would frighten me and send my vivid imagination into overdrive; after glimpsing a scene from THE BLOB (1958) at a neighbor's house, I relived that scene in nightmares for years. (It seems as though I always saw that type of thing at a neighbor's!) Harryhausen's black and white flying saucers remain much more potent and scary to me than any modern science fiction film.

It's only recently that I've been trying out films such as WAR OF THE WORLDS, EARTH VS. THE FLYING SAUCERS, or CREATURE FROM THE BLACK LAGOON (1954). I'm at the point now where I can start to appreciate them as sort of a "movie thrill ride." Coming up soon on my watch list: IT CAME FROM OUTER SPACE (1953) starring Richard Carlson.

Something that did help dissipate the film's impact a bit was the thundering voice of Paul Frees as an alien. I couldn't be completely afraid of a Martian who sounded remarkably like Disneyland's "Ghost Host"! Frees did quite a bit of other work for Disney, including narrating the great short DONALD IN MATHMAGIC LAND (1959).

This film was directed by Fred F. Sears, with black and white cinematography by Fred Jackman, Jr. The screenplay by George Worthing Yates and Bernard Gordon was based on a story by Curt Siodmak, who wrote the screenplays for I WALKED WITH A ZOMBIE (1943), THE MAGNETIC MONSTER (1953), and RIDERS TO THE STARS (1954). The running time is 83 minutes.

EARTH VS. THE FLYING SAUCERS has been released on DVD; it was reviewed by Glenn Erickson back in 2002. The DVD is available via Netflix.

The movie can also be rented for streaming at Amazon Instant Video. It's previously been released on VHS.

I watched a print I recorded from Turner Classic Movies. The trailer is available at IMDb.
Email ThisBlogThis!Share to TwitterShare to FacebookShare to Pinterest
Newer Post Older Post Home