COPPER SKY is an interesting little Western distinguished by an appealing performance by Coleen Gray, a memorable musical theme, and the rugged beauty of Kanab, Utah. The film isn't entirely successful, but it kept me engrossed for all of its fast-paced 77 minutes.

Nora Hayes (Coleen Gray), a schoolteacher from Boston, arrives in the small Western town where she is to teach, only to discover the entire town has been decimated by an Indian attack. The wagon driver (Paul Brinegar) who accompanied her from the nearest stagecoach station is soon dead too, leaving Nora very alone in a very scary place...until she comes face to face with inebriated Hack Williams (Jeff Morrow). Williams had been drunk in a jail cell during the attack, unnoticed by the Indians.

Nora and Hack quickly load supplies into the wagon and leave, hoping to find safety, but with Indians on the warpath, it's a long, dangerous trip. The very proper Nora and the whiskey-loving ex-Cavalryman Hack are an odd couple, but as they struggle for survival they gradually come to appreciate one another.

If this story sounds familiar, it seems in some ways to be a loose Western reworking of THE AFRICAN QUEEN (1951). Gray is absolutely wonderful; I've seen her in half a dozen films, and this is my favorite of her performances so far, after KISS OF DEATH (1947). Nora finds herself in absolutely appalling circumstances, but she gathers herself together to confront the drunken Hack and try to steer him toward a game plan: "The important thing is that you and I have found ourselves in the midst of a disaster. Something has to be done. What?...Most certainly something has to be done." And, by golly, something is done. 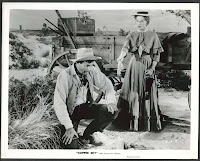 Nora doesn't suffer Hack's drinking gladly, and eventually she risks his wrath to remove the problem. Fortunately Hack has noticed she's a lovely young lady, and even though she confounds him with her nonstop nervous chatter, she starts to get under his skin.

Morrow is the weak link in what is otherwise quite a good little movie. The role needed someone with more charisma underneath the grizzled exterior, still a tough guy but perhaps a little younger; someone like Sterling Hayden would have been perfect. I was completely unfamiliar with Morrow, and when he first entered the picture, with his craggy, wide face, I assumed he was a supporting character. It took a while for it to register that he was the film's hero. It also would have made him more appealing if the character had had to sober up earlier in the story.

Morrow does have some good scenes late in the film, as the newly sober Hack, though in each case Gray is a key factor in the scene's success. The first is an action scene which takes place after Nora has been ranting about the evils of drink, suddenly confessing how alcohol impacted her own life; Nora is oblivious that while she's talking nonstop, Hack has heard threatening sounds. The entire sequence unfolds in a very interesting manner; Nora has repeatedly been confronted with bodies, but now she must accept the reality of kill or be killed, and it changes her perspective. 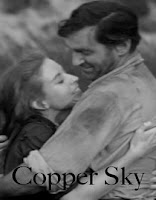 The second memorable scene takes place when Nora and Hack pray together; it's extremely touching as he searches for the words and she helps him along. It's special to watch her face in this scene.

Finally, there's an unexpected romantic scene in a river which is absolutely lovely. Although Morrow does well in these scenes, I felt that he was kind of along for the ride, in the shadow of Gray's glowing performance. With another actor who had a little more to offer himself, and just a few tweaks to the story, this film might have gone to a higher level and become much better known. Still, I felt like I'd stumbled across something pretty interesting when I watched this relatively unknown film, and I recommend that Westerns fans give it a try.

Much of the film was shot in Kanab, Utah, which was also the location of WESTWARD THE WOMEN (1951), due out on DVD this week. The scenes where Hack and Nora make camp at night are noticeably shot on a soundstage, but the rest of the movie has an authentic open-air feel, filmed in the great outdoors.

The title theme music, by Raoul Kraushaar, effectively sets the mood and is used throughout the film.

COPPER SKY was produced and directed by Charles Marquis Warren, who also directed the Joel McCrea Westerns TROOPER HOOK (1957) and CATTLE EMPIRE (1958). The screenplay by Eric Norden was based on a story by Robert Stabler. The black and white cinematography was by Brydon Baker.

COPPER SKY, which has also been shown in the past under the title THE FAR WEST, can be seen via Netflix streaming.
Email ThisBlogThis!Share to TwitterShare to FacebookShare to Pinterest
Newer Post Older Post Home