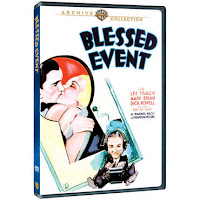 BLESSED EVENT is a snappy pre-Code comedy with a terrific cast and a well-paced, sharply written script.

Lee Tracy, who starred in the original Broadway cast of the newspaper comedy THE FRONT PAGE in 1928, here plays Alvin Roberts, a gossip columnist inspired by Walter Winchell. Alvin will print anything about anyone, as long as it's true, as he's a constant target for libel suits. Alvin's specialty is spreading the news about "blessed events," especially those which take place too soon after the wedding -- or after no wedding at all.

Tracy rattles off dialogue in machine gun fashion, surrounded by some of the best in the business. Dick Powell makes his film debut as radio crooner Bunny Harmon. The genuine nice guy of Powell's roles in his later Busby Berkeley musicals is missing here; Powell gives Bunny a smarmy, sharp edge underneath his cloying smile and repetitive singing. 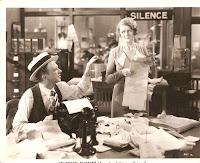 Ruth Donnelly, one of my all-time favorite character actresses, plays Alvin's long-suffering secretary, and Allen Jenkins is very amusing as a mobster's goon who ends up as Alvin's paid informant. I especially loved deadpan Ned Sparks as newspaperman George Moxley, Alvin's predecessor writing the column; he has a laugh-out-loud funny line near the end of the film.

Mary Brian is a newswoman trying to convince Alvin to give up his sordid column, and Frank McHugh turns up as Bunny's P.R. man. Emma Dunn is amusing as Alvin's kind but somewhat dim mother, who has a crush on Bunny. Isabel Jewell is a singer in the "family way," and Jack LaRue is (what else?) a mobster's hired gun.

It's the kind of movie where George Chandler wanders in and out of a few scenes in the newspaper office and then Charles Lane pops in, causing the viewer to smile in delighted recognition. This was one of a mere three films Lane made released in 1932; the following year his total was up to 13, on his way to over 350 screen credits in his career.

The movie's worth seeing just for all the great faces, but it's also stylishly presented, and the 80 minutes move along at a lightning-fast pace. The film remains surprisingly relevant; we may no longer be shocked by a well-known person having a child out of wedlock, but gossip remains a hot commodity decades later, as well as questions regarding what's "fit to print." I'm a bit surprised the movie isn't better known, but I suspect the film's pre-Code status and subject matter may have kept it off TV in earlier decades. It would be interesting to know for sure. 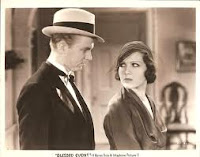 The movie was directed by Roy Del Ruth. The screenplay by Howard Green was based on a play by Manuel Seff and Forrest Wilson. Allen Jenkins and Isabel Jewell reprise their original roles in the film version.

BLESSED EVENT is available on DVD-R from the Warner Archive. It was released on VHS back in 1998 as part of the Forbidden Hollywood pre-Code series. The trailer can be seen at Turner Classic Movies.

Lou Lumenick and Mike Clark have written more about the film and the DVD.

The following year Tracy would star as a studio publicity man in Jean Harlow's BOMBSHELL (1933), which would make part of a great double bill with BLESSED EVENT. Between the two films they cover the gossip centers of New York and Hollywood. This movie would also make an interesting double bill with MADE ON BROADWAY (1933) or the much later SWEET SMELL OF SUCCESS (1957), which both also focus on gossip regarding New York's rich and famous. All of these films are available on DVD.
Email ThisBlogThis!Share to TwitterShare to FacebookShare to Pinterest
Newer Post Older Post Home