BEACHHEAD is a tense 90-minute WWII film starring Tony Curtis and Frank Lovejoy. It's not a top-tier war film, but it's well-made, and I found it absorbing and worthwhile.

Lovejoy plays Sgt. Fletcher, who heads a four-man team charged with a special mission on a Pacific island: they're to verify that a message warning the Americans of offshore mines was sent by a French planter claiming to aid the Allies. If the message wasn't a Japanese trick, the men need to send a confirming message and then try to rescue the planter. Within hours the four-man team is whittled down to Fletcher and Burke (Tony Curtis), who's resented Fletcher since most of their platoon was killed on Guadalcanal. 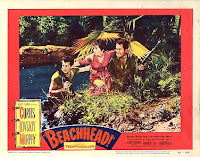 The French planter (Eduard Franz) is the real deal, and surprise, surprise, he also has a daughter, Nina (Mary Murphy); they've been hiding from the Japanese in the hills. With all radio communication gone, the race is on for the group to reach a rendezvous with an American ship in time to be plucked off the island.

The movie continued a couple themes from recent viewing. I just saw Lovejoy, whom I like very much, in the 1955 Air Force film TOP OF THE WORLD (1955); the plot also had echoes of the Western COPPER SKY (1957), but in this film the leads fight to survive the Japanese Army in the jungle rather than Indians in the desert. 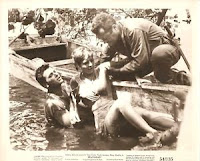 The film's tension begins over the opening credits, as soldiers scramble across an island under enemy fire, and the action continues pretty much nonstop until the final scene. The movie has some moments of fairly brutal violence -- although I'm still puzzled as to where one body suddenly came from -- not to mention a couple of very nasty creepy-crawlers in the jungle.

Lovejoy and Curtis are excellent conveying the stresses of war, struggling to stay alive as men die all around them. And, on a completely different note, it must be said that Curtis was really easy on the eyes back in 1954. 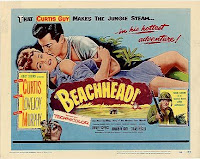 The script is a bit choppy at times, due in part to the fact the characters are always on the move. The role of Nina is underdeveloped, but there's really not time for a back story or for her to convey much about her character; she's almost more of a symbol for both what the men are missing and what they're fighting for. Similarly, the relationship between Burke and Nina is a bit out of nowhere -- apparently his initial antagonism toward her is because he really wants her -- but hey, there's a war on!

The lack of depth in the character relationships is the film's biggest flaw, but the good cast do what they can with what they're given, and all in all it's an interesting and entertaining film.

Actress Mary Murphy, who passed away nearly a year ago, looks absolutely nothing like she did a year later in one of my favorite Westerns, A MAN ALONE (1955). In the later film, with her blond ponytail, she was almost a Shirley Jones lookalike, while in BEACHHEAD she has short, dark hair; I had trouble even recognizing her.

BEACHHEAD was directed by Stuart Heisler, with Technicolor cinematography by Gordon Avil. The movie was filmed entirely on location on the Hawaiian island of Kauai. The cast also includes Skip Homeier, Alan Wells, and John Doucette.

The Richard Alan Simmons screenplay is based on a book by Richard Hubler, I'VE GOT MINE.