ARROW IN THE DUST is an enjoyable, action-packed wagon train Western with an unusual hero.

Sterling Hayden plays Bart Laish, a one-time West Pointer turned cavalry deserter. While on the run he comes across a cavalry unit decimated by an Indian attack. The lone survivor is Bart's cousin, Major Andy Pepperis (Carleton Young). The dying Andy asks Bart to save a wagon train further up the trail which will otherwise be massacred by Apache and Pawnee tribes on the warpath.

Bart at first refuses, but has a crisis of conscience and agrees to Andy's request. Bart impersonates his cousin in order to take command of the troops accompanying the wagon train. A wily Indian scout (Tom Tully) who knows the real Andy agrees to Bart's charade, because Bart seems to know what he's doing, and indeed, Bart uses his military training and frontier know-how to take decisive actions to protect the wagon train. It proves to be a transformative experience.

The other night when I watched the Western COPPER SKY (1957) I had reflected that Sterling Hayden would have been well cast in the lead role of the hard-bitten ex-cavalryman opposite Coleen Gray. A day later I remembered that Hayden and Gray had actually made a Western together and pulled out the tape I recorded from Turner Classic Movies so I could take a look.

Hayden's character is interesting in that there isn't much of an explanation for why he "went bad," we're just told he was a gambler and a deserter. The focus is on taking his character from that point to the next level, as he takes responsibility for the lives of all those in the train under perilous circumstances. 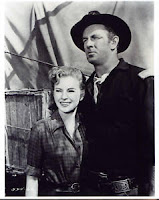 Bart also falls in love with Christella (Gray), who had medical training from her late doctor father and puts it to use aiding the wounded. Christella is one of the only people who knows Bart's true identity, but she sees the good he's doing and keeps his secret. Their romance is pleasant but receives brief attention in this 79-minute film.

Gray is a bit of a chameleon from film to film, in more ways than one. She tends to look very different in many of her films. In some movies her character seems to fade into the background and not make much of an impression; TENNESSEE'S PARTNER (1955) was such an example, and she's pretty much just window dressing here. It's too bad the character wasn't better developed, as Christella is unusual in that she not only has medical skills but calmly shoots to kill during Indian attacks.

In the right role, such as KISS OF DEATH (1947) or COPPER SKY (1957), Gray was my favorite thing in each film, capable of giving arresting, startlingly fresh and natural performances. There's a moment in COPPER SKY where she's laughing as she's walking out of a river near the end of the film, and it was such an expression of real, pure, unfettered joy that I'm not sure I've ever seen a shot quite like it. That performance in COPPER SKY is one of my favorite performances seen in recent months.

Tom Tully, always a great character actor, is terrific here as the cagey scout. Jimmy Wakely contributes strongly as a cavalryman prone to singing a tune called "The Weary Stranger," accompanied only by his guitar. Lee Van Cleef registers in his brief scenes as (what else?) a villain. The cast is rounded out by Keith Larsen, Tudor Owen, Iron Eyes Cody, and John Pickard. 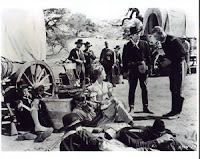 The biggest flaw of this Allied Artists film is the extensive day for night shooting, which in some cases looks to be simply flat-out daytime. It was a bit disconcerting to have characters driving along in broad daylight, discussing the fact it was after midnight. Talk about the viewer needing to suspend disbelief! The filmmakers tried to disguise it by having the front of a wagon block out most of the background in some shots, but it's still plainly daylight. Other scenes are dimmer, with a more traditional day for night look.

The movie could have stood an extra 10 minutes to better develop the lead characters, but all in all this is a very good, fast-moving story. I liked the contrast of traditional Western film elements with atypical leads. Western fans should find it entertaining.

ARROW IN THE DUST was directed by Lesley Selander, the director of countless Westerns of the '30s, '40s, and '50s. The following year he again directed Hayden in a good Western, SHOTGUN (1955), costarring Yvonne DeCarlo and Zachary Scott.

The screenplay by Don Martin was from a novel by L.L. Foreman. The movie was filmed by Ellis Carter.