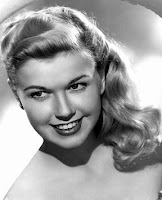 The amazing Doris Day turns 88 on Tuesday, April 3rd, and Turner Classic Movies will be honoring Doris as the April Star of the Month...or perhaps we should more appropriately call her the Star of the Week!

In an unusual scheduling move, TCM is devoting each night this week to Doris Day, showing a total of 28 Day films between Monday and Friday evenings.

Of this initial group of movies, I particularly recommend Doris's film debut in ROMANCE ON THE HIGH SEAS, where she became a star overnight and introduced the classic song "It's Magic."

I also very much like her second film, MY DREAM IS YOURS, and am especially fond of the nostalgic ON MOONLIGHT BAY and its sequel BY THE LIGHT OF THE SILVERY MOON. The latter two films are being shown in reverse order tonight; they costar Gordon MacRae as her boyfriend, with Leon Ames and Rosemary DeCamp as her parents, Billy Gray as her pesky little brother, and Mary Wickes as the housekeeper. 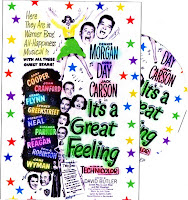 There are lots of fun cameos by Warner Bros. stars in IT'S A GREAT FEELING. I don't believe I've seen the other three films yet.  There are still a number of Doris Day films I need to catch up with!

On Doris's birthday, April 3rd, the focus is mostly on romantic comedies, leading off with LOVER COME BACK (1961), costarring Rock Hudson, and her one film with Cary Grant, the fun THAT TOUCH OF MINK (1962). Next comes MOVE OVER, DARLING (1963), the remake of MY FAVORITE WIFE (1940) in which she starred with James Garner.

The next two films shown tomorrow night were disappointments, DO NOT DISTURB (1965) with Rod Taylor and THE TUNNEL OF LOVE (1958) with Richard Widmark. The latter film was a crass misfire that may represent the nadir of both Day's and Widmark's careers. 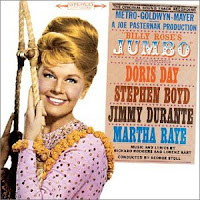 The evening rounds out with LUCKY ME (1954), costarring Bob Cummings, and the musical BILLY ROSE'S JUMBO (1962). I have fond memories of seeing the latter film at the late, lamented Vagabond Theater in Los Angeles in the late '70s or early '80s.

April 4th the the night starts with the suspense film MIDNIGHT LACE (1960), costarring Rex Harrison, and the drama STORM WARNING (1951) with Ginger Rogers, Ronald Reagan, and Steve Cochran. Those are followed by the baseball film THE WINNING TEAM (1952) with Ronald Reagan and a suspense film I like even if it's a bit hokey, JULIE (1956). Love Doris landing that passenger plane!

There are some fun family comedies on April 5th: PLEASE DON'T EAT THE DAISIES (1960) with David Niven and one of my very favorite Doris films, THE THRILL OF IT ALL (1963) with James Garner. Many people fondly remember the hilarious scene where Jim drives his car into a swimming pool.

After those films it's time for THE GLASS BOTTOM BOAT (1966), her second film with Rod Taylor, and IT HAPPENED TO JANE (1959), a fun film with Jack Lemmon. The evening concludes with APRIL IN PARIS (1952).

There are just three films on Friday, April 6th, all focusing on musicians: her great performance as Ruth Etting opposite James Cagney in LOVE ME OR LEAVE ME (1955), which is another film I got to see on the big screen at the Vagabond way back when. 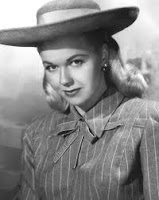 For more information on TCM in April, please visit my post TCM in April: Highlights or check out the complete online schedule.