Note: One of the films I've enjoyed most in the last couple years is a relatively unknown little charmer called DESIRABLE, starring George Brent and Jean Muir. I just rewatched it and enjoyed it as much the second time as I did the first. It's a short film, but it has a well-constructed plot line and well-developed characters. I recently found a post at Immortal Ephemera which says that DESIRABLE was Jean Muir's favorite of all her films.

Hopefully this film will be out from the Warner Archive before too long. In the meantime, watch for it to turn up again on Turner Classic Movies!

Here's my review from March 2010, augmented with some additional photographs:

A businessman (George Brent) attempting to woo a famous actress (Verree Teasdale) instead falls head over heels for the actress's gangly but blossoming 19-year-old daughter (Jean Muir) in DESIRABLE. I enjoyed this delightful 68-minute romance as much as any other film I've seen this year; I watched most of it with a smile on my face and was sorry when it ended.

Age-sensitive actress Helen Walbridge (Teasdale) has hidden away her teenage daughter Lois (Muir) in boarding school, even insisting that Lois remain at school past the time when she should have graduated. Lois comes home unexpectedly due to a quarantine, and before her mother can find a new place to stash her, Lois meets her mother's would-be beau, Mac McAllister (Brent). 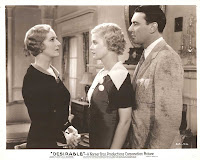 Mac is charmed by Lois, who is totally without artifice and doesn't hesitate to tell him how much she enjoys his company. This prompts a running joke as Mac repeatedly replies to Lois's honest compliments by saying, "Lois, you must never say that to a man," and when she asks why, he just smiles and says, "I'll tell you later." It's increasingly clear Mac's a goner, but he's reluctant to move too quickly, as the sheltered young Lois thinks of him as her best friend. Mac convinces Helen to allow Lois to remain in town. And then wealthy young Russ Gray (Charles Starrett) begins courting Lois...

It's such fun to discover a relatively unknown film like DESIRABLE. It has a briskly paced script which still allows time for interesting character development. It's well acted by an excellent cast. I especially liked Brent in this; by turns he's sensitive, romantic, and funny. Muir (seen last week in 1940's AND ONE WAS BEAUTIFUL) is an unusual leading lady as the coltish, awkward Lois, who is beautiful but out of her element when she is thrust into the social whirl of New York. Lois would rather chat with the maid (Theresa Harris) at a dance than deal with trying to fit in where she's not sure she belongs.

Teasdale (Mrs. Adolphe Menjou in real life) is effective as the brittle Helen, who is lovely but far too wrapped up in herself to have much left over to offer anyone else. Helen's acting ability also makes her quite a manipulator.

There are wonderful faces scattered throughout the film: John Halliday as one of Helen's admirers, Nella Walker as a dressmaker, Jane Darwell as a party guest, and Arthur Treacher as a butler.

This movie was directed by Archie Mayo. The cinematography was by Ernest Haller, and the costumes were designed by Orry-Kelly.

DESIRABLE has not been released on DVD or video, but it can be seen on Turner Classic Movies, which has the trailer available here.

DESIRABLE is a charmer, one of those unexpected little surprises which provides a most enjoyable evening's entertainment.
Email ThisBlogThis!Share to TwitterShare to FacebookShare to Pinterest
Newer Post Older Post Home