And the news gets even better: the Archive DVD includes a commentary track by film historian Scott Eyman, along with the "making of" documentary short CHALLENGE THE WILDERNESS (1951).

I'm told by an Archive rep that Eyman recorded the documentary back in 2008, just before the classic film DVD market radically changed. It's absolutely wonderful that they're able to use it with this release!

WESTWARD THE WOMEN has previously only been available on VHS. It's a superb Western with a tough attitude one might not expect, given the title. It's my favorite performance by Robert Taylor. The scene where he unflinchingly metes out trail justice blows me away each time I see it.

Some spot-on quotes from the Archive press release: "We are more than pleased to bring you the DVD debut of one of William Wellman’s best and most overlooked films...the film’s rugged authenticity of setting and actors shine on the screen. Western great Robert Taylor is at his gritty, hardest best..."

Here's an advance peek at the DVD menu. I'll be posting the direct link to the Archive page when it goes live. (Update: Here's the link! The movie is initially selling at a discounted price of $17.95.)

I couldn't wait to share the great news with Toby, who's already got a post up at 50 Westerns from the 50s, along with a terrific location still. 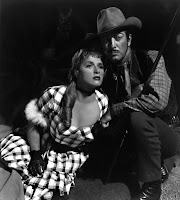 For more on the film, visit Toby's post from 2010, check out Cliff's 2010 post at Immortal Ephemera, and then stop by and read Colin's take at Riding the High Country.

Then, later this week, head over to the Archive and buy it! You'll be glad you did.

There are some other good movies coming from the Archive, including I'LL WAIT FOR YOU (1941), with Marsha Hunt and Robert Sterling in a very good remake of HIDE-OUT (1934); THREE LOVES HAS NANCY (1938), a truly delightful comedy starring Robert Montgomery, Janet Gaynor, and Franchot Tone; and DESPERATE SEARCH (1952) with Howard Keel and Jane Greer.
Email ThisBlogThis!Share to TwitterShare to FacebookShare to Pinterest
Newer Post Older Post Home