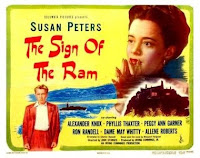 Two weeks ago I shared the first two weeks of the schedule for the 14th annual Noir City Festival in Hollywood. The festival will be held April 20th through May 6th, 2012.

At that time some of the titles for the festival's final week were known, but the schedule wasn't yet finalized.

The complete schedule has now been announced, and it's terrific! 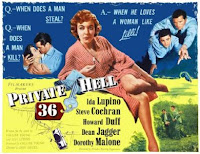 On May 2nd the double bill is SHIELD FOR MURDER (1954), starring and co-directed by Edmond O'Brien, along with PRIVATE HELL 36 (1954), a Don Siegel film starring Ida Lupino, Howard Duff, Steve Cochran, Dean Jagger, and Dorothy Malone.

On May 4th it's THE MALTESE FALCON; the schedule doesn't specify which version but I'm guessing it's the 1931 version with Bebe Daniels and Ricardo Cortez, as the other film on the bill is CITY STREETS, also from 1931, starring Gary Cooper and Sylvia Sidney. 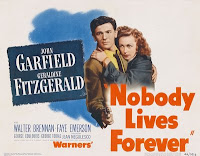 There's a matinee showing of John Garfield and Lana Turner in THE POSTMAN ALWAYS RINGS TWICE (1946) on Saturday the 5th, and that night there's a fantastic double bill of THREE STRANGERS and NOBODY LIVES FOREVER. Both films, released in 1946, were directed by Jean Negulesco and starred Geraldine Fitzgerald. Her costars in THREE STRANGERS were Sydney Greenstreet and Peter Lorre, with John Garfield costarring in NOBODY LIVES FOREVER.

Geraldine Fitzgerald's son, director Michael Lindsay-Hogg, will be present on the 5th. Interesting side note: I had no idea, before reading it today, that Michael's biological father was Orson Welles.

I think I may well spend all of Sunday afternoon and evening at the Egyptian on the 6th. There's a 3:00 p.m. double bill of Lloyd Nolan in CIRCUMSTANTIAL EVIDENCE (1945) followed by a film I've really wanted to see, THE SIGN OF THE RAM (1948). It was the only film made by Susan Peters after the shooting accident which left her in a wheelchair. Phyllis Thaxter costars. 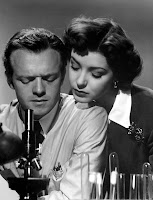 The best night of the whole series may be the closing night on May 6th: Marsha Hunt night! Miss Hunt will be there in person for screenings of the delightful "B" movie KID GLOVE KILLER (1942) followed by MARY RYAN, DETECTIVE (1949). Marsha plays the title role, with a great supporting cast of favorites such as June Vincent, John Litel, Arthur Space, and John Dehner.

It's fairly unlikely I'll get to see Marsha Hunt and Eddie Muller at the April 13th screening of RAW DEAL (1948) at the TCM Film Festival, but I wasn't too sad about it since I had the good fortune to meet them both at Noir City last year. Now that I know there's a Marsha Hunt night to end this year's Noir City Festival, I'm one very happy filmgoer!
Email ThisBlogThis!Share to TwitterShare to FacebookShare to Pinterest
Newer Post Older Post Home