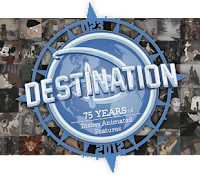 The two-day event will take place at the Disneyland Hotel's Grand Ballroom this August 11th and 12, 2012. Tickets went on sale this morning.

Destination D is a relatively intimate seminar-style event. Unlike the big Disney Expo, which requires lining up repeatedly to attend desired panel presentations, at Destination D everything comes to the ballroom. 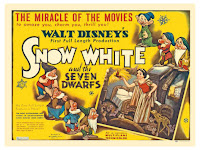 This year promises to be very special. The weekend will include "an extraordinary reunion of Disney voice talent," a special 75th anniversary tribute to SNOW WHITE AND THE SEVEN DWARFS, a presentation on how Disney's animated films have influenced Disney parks, a Saturday evening concert by Dick Van Dyke, and a Sunday evening concert by composer Alan Menken.

As was the case two years ago, I'll be attending with my eldest daughter. She's a particularly big Menken fan and is especially excited about seeing him.

It's a bit ironic that I was disappointed there wasn't any room to see Van Dyke at last year's Disney Expo, as just a couple of months later I got to see him at a DICK VAN DYKE SHOW 50th Anniversary Celebration, and now I'll also have the opportunity to see him at Destination D.

The just-concluded TCM Festival included a special screening of SNOW WHITE; TCM even had a personal appearance by dancer Marge Champion, the live-action model for Snow White. I've only seen the film in a theater once, when my husband and I attended a rerelease in the early '80s, and I'm hoping that a showing might be part of the weekend's activities.