...Many moviegoers at the TCM Classic Film Festival saw HOW THE WEST WAS WON (1962) in Cinerama at the Cinerama Dome in Hollywood this morning. The L.A. Times takes a look at the challenges of projecting this film.

...I'd have loved to see home movies shown at the TCM Festival and hope they'll become available to a wider audience in the future.

...And over at the New York Post, Lou Lumenick interviewed Debbie Reynolds, who's been an integral part of this year's festival. 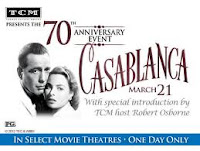 ...TCM's national theatrical presentation of CASABLANCA (1942) in March was so successful that there will be an encore on April 26th. The list of theaters is here.

...The consequences of studios abandoning film for digital can be scary. Read what almost happened to both TOY STORY and TOY STORY 2.

...Tales of the Easily Distracted and Classic Becky's Brain Food will be cohosting a fun blogathon this summer: The Best Hitchcock Films Hitchcock Never Made. The fun kicks off July 7th.

...The L.A. Times describes the ArcLight Cinema in Los Angeles. My oldest daughter has been there a couple times and appreciates some aspects, including being able to reserve a seat and also see hard-to-find movies. She was surprised, however, that it's not better maintained, given the pricing and its reputation.

...Kristina has posted a new round of "Quick Reviews" at Speakeasy, including two fun Loretta Young films. 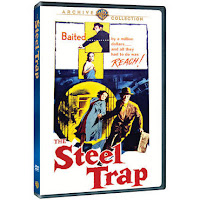 ...Mike Clark reviewed the Warner Archive release of THE STEEL TRAP (1952), which reunited SHADOW OF A DOUBT (1943) costars Joseph Cotten and Teresa Wright.

...Tom Hanks and Emma Thompson are said to be the potential stars of SAVING MR. BANKS, an upcoming film about the relationship between Walt Disney and MARY POPPINS author P.L. Travers.

...ClassicFlix reports there's a pre-Code collection of Columbia films coming in July from the TCM Vault. The titles will include Barbara Stanwyck in SHOPWORN (1932). There's no information or cover posted yet at TCM; I'll have more details in the future.

...Caftan Woman has a nice post up on the wonderful singer-actor Richard Kiley. I hope his miniseries A YEAR IN THE LIFE is released on DVD in the future!

...The Dodgers have had a great start to their season, including pulling off an exceptionally rare triple play in today's game. It was only the second triple play in the half-century history of Dodger Stadium.