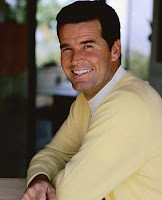 Miscellaneous bits of news and fun stuff from around the Internet...

...James Garner is celebrating a birthday this Easter weekend. He turned 84 on Saturday, April 7th. It's wonderful that in the two years since I posted a birthday tribute there has finally been an announcement that Season 1 of MAVERICK will come out on DVD. Just a few weeks left to wait!

...Thanks to Caftan Woman for mentioning on Twitter that April 7th was also the birthday of Roberta Shore, star of THE VIRGINIAN, Disney's MICKEY MOUSE CLUB serial ANNETTE, and also the Disney film THE SHAGGY DOG (1959). To tie with in with James Garner, Roberta was also in an episode of MAVERICK, "Royal Four Flush." 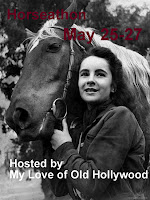 ...A Horseathon is heading our way at the end of May! Page of the blog My Love of Old Hollywood is sponoring the first-ever blogathon focusing on horse films. All are invited to participate -- check out Page's post for information and how to sign up. I plan to review the film SMOKY (1946), starring Fred MacMurray and Anne Baxter. It's been on my "to see" list for a while now and the horseathon provides great motivation!

...Over the last couple weekends I've linked to positive reviews of the '60s comedy MY LIVING DOLL, starring Julie Newmar and Robert Cummings. Now Susan King of the L.A. Times weighs in, saying it was a "show ahead of its time." I was fascinated to learn that the original 35mm negatives of the show were destroyed in the Northridge Earthquake, so what's on the new DVD release comes from 16mm prints owned by collectors.

...Thanks to my friend Mel for passing on this link to a new interview with Doris Day.

...I had the pleasure of corresponding with a professor from UC Santa Barbara and CalTech last week and became aware of a really interesting-looking book he wrote, KEEP WATCHING THE SKIES! THE STORY OF OPERATION MOONWATCH AND THE DAWN OF THE SPACE AGE. I've put it on my "to read" list, and I thought that those of you who share my love for films touching on Cold War issues and the Space Race may be interested too. The book also has a website.

...This three-minute time-lapse video of the action around the apartment courtyard in REAR WINDOW (1954) has been making the rounds in the blogosphere. Kind of an interesting idea.

...Over at Shadows and Satin, Karen's TCM film noir pick of the month is OUT OF THE PAST (1947), airing on April 27th. I sure can't argue with that choice! And I'm happy to say that I was one of the contributors to the special issue she mentions of the Dark Pages newsletter.

...Speaking of film noir, at Dear Old Hollywood Robby's got a fantastic detailed post on the locations used in GUN CRAZY (1947), including then-and-now comparison photos. One of the locations is on a street I drive down to park every time I go to the Egyptian Theatre...and it just so happens that GUN CRAZY is playing at the Egyptian next Saturday night as part of the TCM Film Festival. Mr. Film Noir himself, Eddie Muller, will be hosting, and the film's star, Peggy Cummins, will be in attendance. I have half a mind to drive up there and see if I can get a single-film ticket, especially as single tickets are half price with my American Cinematheque membership.

...Nicole Kidman is said to be in talks to play GRACE OF MONACO.

...Last weekend I mentioned that Warner will be bringing Samuel Goldwyn films to DVD. Lou Lumenick has more at the New York Post. Incidentally, I said in my post I didn't think WUTHERING HEIGHTS (1939) had ever been out on Region 1 DVD, but Lou says that long ago there was a DVD put out by HBO Video, of all companies.

...Peter Bogdanovich muses briefly on that holiday perennial, EASTER PARADE (1948), which is playing in my house even as I type this. I feel that movie provides a kind of thread back through Easters past, as it's always part of our family's enjoyment of the day.

...I enjoyed this article from Forbes, "Inside Amazon's Idea Machine: How Bezos Decodes the Customer."

...Attention Southern Californians: Next weekend actress Julie Adams will be appearing at Monsterpalooza in Burbank on Friday, April 13th. She'll be signing copies of her autobiography, THE LUCKY SOUTHERN STAR. I had the honor of having Miss Adams sign her book last October; she's wonderful, and it's a lovely book. Do take advantage of the opportunity if you can! She'll also be at the Noir City Film Festival at the Egyptian Theatre in Hollywood on April 28th.

...Notable Passing: I was sorry to learn of the too-early death of painter Thomas Kinkade at the age of 54. I appreciate the beauty and sense of optimism conveyed by his paintings.