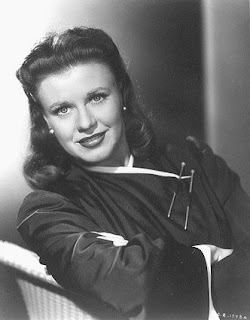 ...you got it, y'all... Ginger Rogers 'general statistics' for the 1940 Census have been discovered, upon the Federal Government's 'release' of that data recently. I saw a story on CNN or somewhere regarding the info that is now available, and of course, my first thought was, 'Hey...I need to go see if our girl is in there...' I was pretty sure she was, as she was a pretty patriotic-type person (which, contrary to current popular belief, is NOT a bad thing, y'all...) - BUT, before I could flounder my way around the Census site, our own incredible Gingerologist, Lady Fioraon (A.K.A. Barbara) went and hunted it down for us...AWESOME work, Lady F!!!!
SO, here is the actual (copy) of the census 'roll', with Ginger's info underlined in red: 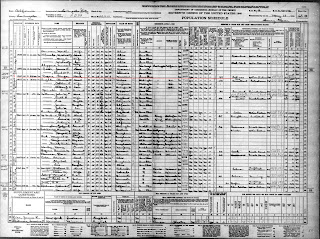 ...hopefully it is legible for y'all... but it's some pretty interesting stuff...of course, she was residing at her mansion at 1605 Gilcrest Drive, and the interesting thing about that is, not only do you have Ginger's info, but ALSO her nearest neighbors' stats (remember, Census folks just went 'door-to-door' in those days... would have been tough to tread up those hills, but if Ginger's at the door...well, it's not that tuff then...).

...some info gleaned from this roll, which is interesting, if not downright funny...

- Ginger's house is valued at $125,000.00...which is WAY more than most of the houses in the area...remember, this was in the 'high-rent' district of L.A.!
- For those who wondered, yes, this 'officially' verifies that Ginger only made it to Eighth Grade... but had way more sense than lots of folks out there!
- She worked a 44-hour week when this thing was done, which honestly sounds a bit lax for her...well, she had 'earned' that schedule at this point, right?
- Her income in 1939 is noted as "$5,000+", which evidently was as high as they counted back then...

Well, hope you get a kick out of this...I really dig these old documents, for whatever reason... AND, if you are interested in 'hunting down' anyone in particular, here's the 'general link' to the site - although it already has a 'notice' that the site is running slow, due to excessive 'hits' (looks like I'm not the only one into 'old archive stuff'!):


In other Gingery News,
...Ginger is WELL on her way to the Championship of the 'Best Actress' poll over at Monte's 'All Good Things' blog...  she is WAY ahead of Grace Kelly, with hours to go... HOWEVER, the other poll is getting interesting, as of this time, Natalie Wood has surged to near even with Judy Garland...so, that one is too close to call at this point... let them beat each other up, and the winner stagger in against a well-rested Miss Rogers...
AND, thanks for those who voted on the 'Movies Unlimited' poll...looks like sixth place is pretty secure for VKM...since that is a 'free-for-all' poll with most EVERYONE on it, I guess Ginger did pretty well on it... not sure when that one ends, tho...
...and a programming note... the '20 Million Sweethearts' review is still in a  'holding pattern', but about 90% there...I will try to get it out this weekend...promise.

Well, until then, remember to...