...has it ALREADY been over a week since the last post? Yowzah, time is just chugging on down the line, y'all...

Well, I originally was going to start this GingerFilm review process with her first 'full length' film, "Young Man of Manhattan"... but, if this is truly a review of EVERYTHING Ginger ever committed to film, then we must start at the beginning (more often than not, a proper location for starting things...) ...AND, this will kind of give ME a 'starting point' for this whole series - a 'test run', if you will, to make sure all the bases will be covered for the 'full-length' film reviews...AND for YOU to give me some 'pointers' as to what else is needed. 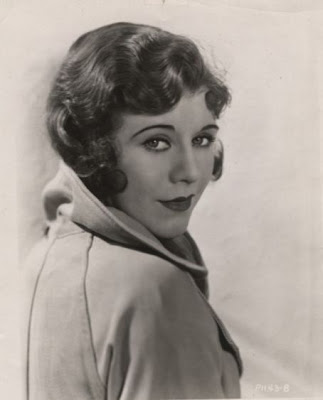 The beginnings of Ginger's film career started in 1929, when she was recruited for several 'two-reeler' shorts, from various studios. The introduction of 'talkies' had proved to be very successful, and studios were churning out whatever they could get on film and to the theaters ASAP, to keep the ball rolling. A large portion of these 'shorts' consisted of vaudeville routines that were popular at the time; Ginger's contribution was no exception, as she was 'promoted' as a stage act, with potential to become a film star as well...

It is estimated Ginger appeared in ten to twelve 'shorts' between 1929 and 1931; the most well-known of these are the following: 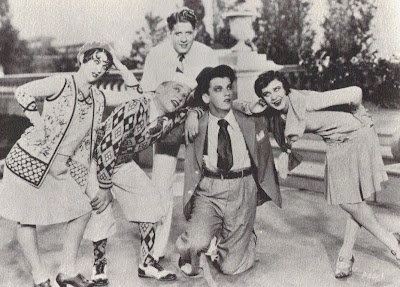 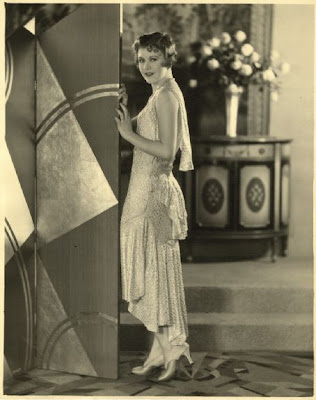 A Day of a Man of Affairs (1929 - Columbia) - Also Starring: Maurice Holland and Mell Ray. BTW...Ginger is DEFINITELY putting the 'shorts' in THIS particular short, eh? Huey is quite interested in obtaining a copy of this one, as if you couldn't guess... 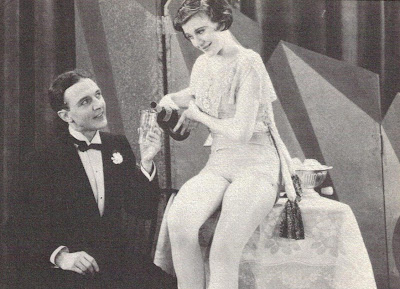 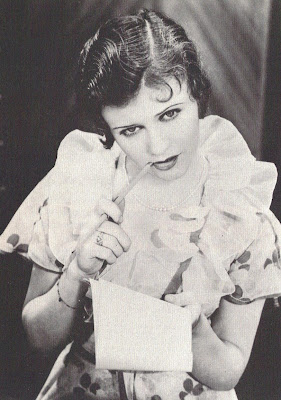 Of these, only "A Night in a Dormitory" and "Office Blues" are currently 'available'; BTW, if ANYONE has a copy of the other two, OR any other 'early' Ginger short, we can begin negotiations anytime... :-]

On to the reviews of these two 'available' shorts...

Produced and Directed by Harry Delmar.

Favorite Ginger Line(s) / Moment(s) - She has no 'dialogue', just singing...quite cutely throughout.

Gingery Goodness Factor (1-10): (6.5) - Always love Ginger singing, but no dialogue limits the overall Ginger Experience in this one.

Review - A bunch of girls live in (you guessed it) a dormitory (Ginger ISN'T one of them...). The gist of the tale is when one of the chicks sneaks home late one night after a 'night on the town'...she speaks to a friend about the rotund gent she was escorted by, the comedy act she saw (a rather weird slapstick deal with bearded Russian dudes...), a pretty cool dance routine by Thelma White, and of course, the two very cute GingerTunes. In an unrelated story, two other dudes with dames are also at the 'club', and they have cooked up an 'eat-for-free' scheme where they get in a 'take it outside' brawl in order to skirt payment; a few dicey moments ensue, but it works out in the end.. Ultimately, this film is a vehicle for some performers to 'do their thing', and we are fortunate enough to see Ginger in action in her 'vaudeville mode'... a rare find 80 years hence...

Favorite Ginger Line(s) / Moment(s) - Well, she pretty much sings throughout this one, too... but it is kind of cute how she 'shuts down' the poor sap who tries to ask her out to lunch...the first glimpses of that SassyGinger we all love...

Review - Well, not much in the way of a story... Miss Gray (Ginger) is a secretary (what administrative professionals used to be called back in the day...) for a Big Cheese, who happens to also appear to be all of 20 years old... She is sweet on this dude - he IS the Big Cheese, after all... so she sings a few tunes that will eventually woo him into her arms. There is another dude who is a co-worker of Miss Gray's, but she dispatches his ill-fated advances in short order. The 'big' number, "Dear Sir", morphs into a 'dream sequence', and Ginger is very cute in it...her singing here, as in most of her 'early years', is a bit 'youngish' sounding, but still just as neat as all-get-out, y'all...

Available From - YouTube...Or, (hopefully) check it out below:

Well, hope this kind of 'sets up' the template for all of the subsequent reviews I will be cranking out... again, will TRY to get all of them done before July 16th....but if it doesn't look too promising, will stretch it out - I want to make sure each film is given its proper due, y'all...

VKMfanHuey
---
Email ThisBlogThis!Share to TwitterShare to FacebookShare to Pinterest

...A little late with these resolutions, but...

...I have been pondering and pontificating about how to properly approach this year in Gingerology... of course, the proposed journey to where it all began is still the 'highlight', but also trying to keep the blog cooking at a 'normal' clip. But first, a picture that is so unbelievably beautiful, it just needs no real elaboration... it's just slap-dawg perfect, as so many are... this would definitely qualify for a 'pic of the week' or whatever... 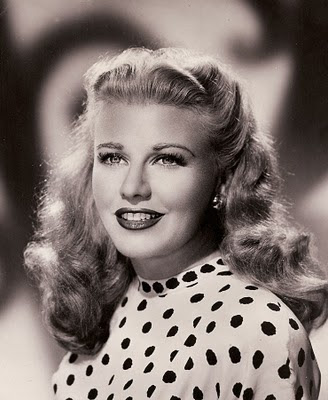 OK...FIRST... I am going to watch every GingerFilm currently available (hey, to have 73 out of 74 ain't bad!) in chronological order, then post a general review, generally noting the 'GingeryGoodness' of the film, favorite scenes, favorite lines, favorite tunes, and a general overview of the film itself. If you know my 'philosophy' (using that term VERY loosely) regarding movie reviews, I will seldom, if ever, reveal the end of one - although most of y'all know them by heart - I might just do a 'spoiler alert' deal and place the rest in the comment section or whatever. I will also attempt to 'rank' each movie as I go along, compiling the list until the '1-73 rankings by Huey' are revealed. 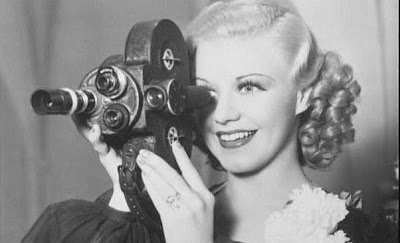 The goal is to get all of these done by her BIRTHDAY... that's just under six months off; I will not have a 'set schedule', as Ginger did not care for structured plans... I WILL, however, try to be as diligent as possible (dang, how hard is it to get me to watch a Ginger movie anyway? :-P ) So, hopefully at least a few a week will be appearing...so stay tuned.

SECOND... I am still in the process of 'organizing' my GingerFiles, both electronic and 'hard copy'... and I will be posting specific stuff such as magazine articles, items of interest, etc... throughout the year. As a 'extra' for the site, I may institute a 'Huey's fave pic of the week' (as alluded to above...let's just consider that one the 'first entry' :-] ), which really may prove difficult in terms of narrowing it down to one at a time - but worth sorting out and meticulously studying pics for the selections (tough work, but... :-] ) 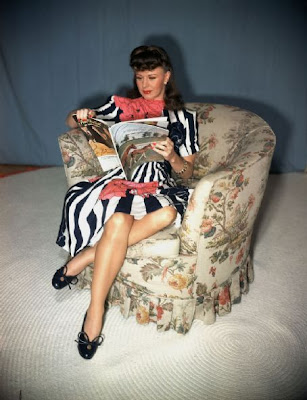 THIRD... A long-running 'project' I have been compiling is a 'This Day in Gingerology' feature... which is pretty self-explanatory...but I am just hung up on the fact there are still some days not covered (It's pretty hard to fill out 366 (yeah, I'm including leap year) days with unique events) - I am putting in births/deaths of folks associated with Ginger, as well as recent events from Gingerologists... SO, I am going to try to get that up and running VERY soon.

FOURTH... Bolster the musical portion of the site... I have quite a collection of GingerTunes (again, both electronically and 'hard copy') that need to be placed here for access... just haven't gotten it DONE yet, dang it! In a related issue, video clips would also be an awesome addition - even ones y'all are familiar with, but to just have them 'collected' at one spot for easy access. 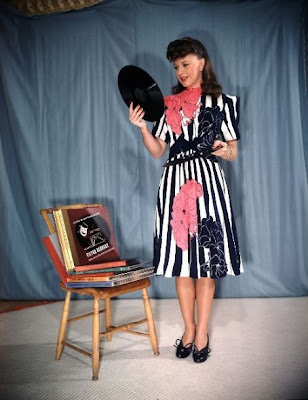 ... I LUV that pic above - I am quite the audiophile, with a closet full of LPs - yep - vinyl 33-1/3 RPM discs of goodness... and ya know, it usually irks me to see someone NOT handling a record by its edges... but if there EVER was a glaring exception to that retentive trait of mine, it would fall at the feet of our Miss Rogers, of course... Play Frisbee with them if ya want to, Ginger!!! :-)

Well, guess that's enough to deal with... the issue I have is time, like everyone else... different circumstances, but same 24 hours/day... but maybe things will lighten up and Huey can finally give Miss Rogers the attention she deserves.

In the meantime, y'all keep up the great work on your respective sites... it's so great to see so many folks with love for the classic era... at times it's hard not to try to want to 'convert the world', but it is quite unrealistic, and honestly...it's kinda cool to not be 'like everyone else'...ain't it? :-]

Y'all Keep It Gingery...and wish me luck in these Gingery endeavors!

Welcome to 2011...The GingerCentennial festivities have offically begun! 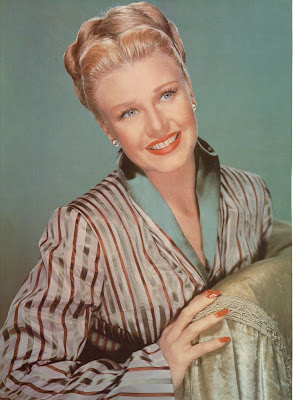 ...well...hiyahiyahiya, y'all!!! ...first of all, sorry for the 'down time' between posts... I have not really had much happening, other than trying to get back to 'normal' from the holidays (although it is sleeting here as we speak, and by morning 3-4 inches of snow is expected, thus throwing the 'normal' thing back off for a few days...oh well...) ...anyway - hope everyone had a tremendous holiday season! Just rummaging through all my 'Gingerbilia', and found this beauty of a pic above, which I am guessing is from Barkleys... due to the hair, and also the eyebrows (yeah, we are REALLY Gingerologists, y'all...:-] )

The year 2011, of course, marks the 100th since Ginger's birth...and to celebrate, Gingerology will hopefully have lots of cool stuff going on...I have had a few things 'developing' for awhile now... and should be ready to get rolling on them!

Someone asked HOW will Gingerology celebrate on 07/16/11... well, the plan is... to be in Independence, Missouri - at 100 West Moore Street, of course - SOMETIME on the day of July 16, 2011... it just seems to be the right place at the right time... my wife has a cousin who lives in Kansas City, and we have been wanting to get up there to see her anyway... so it's really quite feasible, y'all... more info as it becomes available. I also just want to check out the archives or whatever there and see what kind of Gingery goodness I can unearth...
Here's a brief article and pic regarding Ginger's birth house..she lived there about a year or so, if I remember correctly... it's not extremely clear in her bio. I think this has actually been posted before, but...here ya go again: 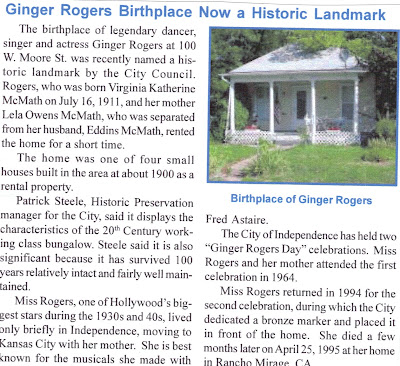 OK - well, I am off now to prep for the 'blizzard' or whatever it is that's approaching nigh... hope all of you are faring well - it seems to be hitting everything east of the Mississippi. Stay hunkered down and fuzzy!!! :-] and of course, be sure to also...